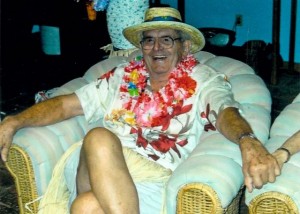 Obituary: France ‘Pepe’ Betten, 85, of Indian Harbour Beach, passed away after a wonderful life and a hard fought battle on Tuesday, October 25, 2011. Born Francis Anthony Betten on July 16, 1926, the third of eight children of Viola (Wolfe) and Frank Betten, of Lebanon, Illinois.

He was preceded in passing by his wife of 62 years, Coe (Harris); and survived by all nine of their children, Terry, Cheryl (Rigler), Scott, Randy, Rick, Mark, Chrissie (Abrahams), Laura (Pitten), and Bradford; along with their spouses, Liz, Jan, Claudia, and Bill. France was dearly loved as ‘Pepe’ by 28 grandchildren and 22 great-grandchildren, who will forever cherish the memories of playing elf to his Christmas Santa.

He never shirked from the responsibility for all the family he helped create, and proved to be an imaginative and consummate salesman. He revolutionized the beer truck industry and built a company that still bears his name today. He was a pioneer “motorhomer” who bought his first of over fifteen coaches in the mid 1960’s.

However; what he considered his greatest achievement was that he and Coe took their nine children from one end of this great nation to the other – to every park, every monument, every friend and every family member they passed along the way.

That is why, in the days and weeks to come, people across this nation who knew and loved him, will learn of and mourn the passing of a truly unique man.